William Marrion Branham was one of the most influential Bible ministers of our time.

He was considered by many to be the initiator of the healing and charismatic revival that began in 1947, and from his ministry there sprang a myriad of other ministers who became internationally known.

From 1947 until the time of his passing in 1965, the powerful ministry of William Branham was well known and considered unparalleled in the history of gospel meetings. The impact of the supernatural ministry of this one man was felt not only in North America, but also around the world.

The Pillar of Fire

January 24, 1950 a photographer named Ted Kipperman was sent by Douglas Studio to cover a debate on the controversial topic of Divine Healing (specifically relating to Bro. Branham’s ministry) held between Mr. Bosworth and Mr. Best at the Sam Houston Coliseum in Houston, Texas.

At the end of the debate Mr. Best demanded that Bro. Branham present himself in person on the stage, and posed for several aggressive photos before challenging Bro. Branham as a divine healer. Bro. Branham denied ever referring to himself as a divine healer, and stated, “Anyone knows that God will have nothing to do with error and if I tell the truth then God will speak of me.” (51-0718 The Angel of the Lord). The Pillar of Fire, as described in scripture and seen at many of Bro. Branham’s meetings descended at that moment, and Mr. Kipperman stepped forward and took the photograph featured here. The photograph was verified as being an authentic capture of a supernatural being by Mr. George J. Lacy of the American Society of Questioned Document Examiners. 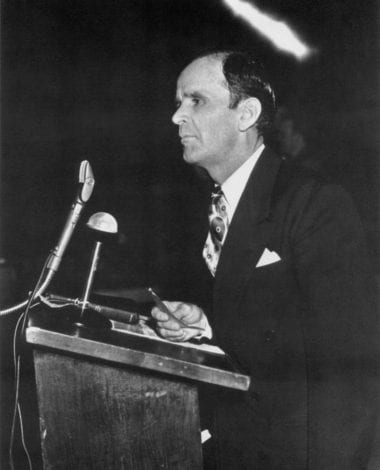 Deep Calleth To The Deep

Deep Calleth The Deep is a one hour video segment from the sermon of the same name preached June 24, 1954 during the Full Gospel Business Men’s Fellowship International Convention at Constitution Hall in Washington DC.

The convention was two days, spanning Wednesday June 23rd and Thursday June 24th. Bro. Branham teaches on Divine Healing and then ministers to the people in a prayer line with his gift of discernment. The following quote is an excerpt from the sermon:

“Deep calling to the deep: if the deep’s calling, there’s a deep to respond. In other words, before there was a tree to grow on the earth, there had to be an earth to grow in first.

God never made the tree for the earth, He made the earth for the tree. He made the earth and commanded the earth to bring forth a tree. And the earth was calling, till the tree come forth. Before there was a fin on a fish’s back, there was no water for him to swim in. The reason he’s got a fin, is because there was water for him to swim in to use it. Everything that we have is for a purpose, and for a cause….And then the very reason that you’re here tonight, you believe in Divine healing. And if there wasn’t even taught in the Bible, if you group of people believed in Divine healing, there has to be a fountain open somewhere, or you’d never have the desire for it. If you’ve got the desire to be healed by God, there’s a God to heal you. That’s right. For the deep calls to the deep.” 54-0624 – The Deep Calleth To The Deep Rev. William Marrion Branham